We are now on day 6 of our cross-country move. If you haven’t read about the earlier parts of our journey, go check them out now. Part 1 saw us leaving California. Part 2 brought us to New Mexico. We made it through most of Texas in Part 3. And now, we are headed to our new home.

Our goal for the day was to make it to New Orleans where The Husband’s older sister lives. Before heading to the highway, we had to make a stop at Shipley’s for apple fritters. We learned about Shipley’s in 2009 when we visited Houston to watch Navy play Mizzou in the Texas Bowl. We are rarely in Texas but we always try to stop for Shipley’s.

Once sugared up, we continued east along I-20 until we reached Shreveport where we hopped onto I-49 south. We got an early start and were able to make it to Alexandria, LA before we needed to stop for lunch and to do something fun.

It was stiflingly hot but the zoo looked like a fun stop for the kids. There were a few indoor areas where we could see snakes and other reptiles while remaining cool in the air conditioning.  We also rode the train and checked out their Australian Outback area.

We drove into downtown Alexandria after the zoo to grab some coffee and snacks for the kids. It happened to be the Burnt Weenie Festival the day we drove through town. Hilarious and very fun. They had a giant water slide set up in the middle of the street. There were fire hydrants spewing water. A band was playing under a pavilion set up in the street. We stopped in at Tamp and Grind which is an eclectic coffee shop in downtown. The kids enjoyed the delicious cookies (as did I) and and the coffee was great. The staff was really friendly. The barista and I learned we spent many years in the same cities. Overall, Alexandria was a great (and absurdly hot and humid) stop.

We continued on to New Orleans, arriving to The Husband’s sister’s house around dinner time. We called it a night after regaling childhood memories.

In the morning, we tried to take the ferry which is just a few blocked from my Sister-in-Law’s place but, as it was a weekend, it was running on a later schedule which we didn’t want to wait for. Instead, we hopped in the RV and drove the 10 minutes to Cafe Du Monde. After breakfast with a view and history lesson, we headed back to her house to drop her off and then set out for Pensacola. 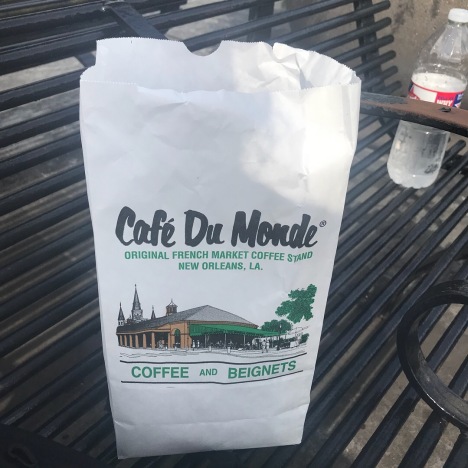 We had a great drive until we reached Florida when it started pouring rain. We felt it was a nice “welcome home” from the state we so recently left. Before parking for the night, we stopped by the National Naval Aviation Museum. It is on base at NAS Pensacola but you don’t have to be military to enter. While The Husband was going through flight school, this was a favorite spot to take visitors. The boys loved checking out and sitting in a bunch of old planes and cockpits. They also rode in a simulator. It was a wonderful and free few hours where the boys could get out some energy while also learning about their dad’s career. 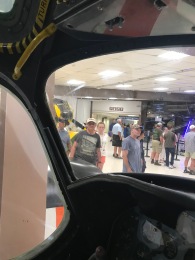 The Husband booked an awesome RV spot right on the water in Perdido Key. Since Florida was giving us a nice, wet welcome, we didn’t spend too much time outside but there was still a beautiful view out the back of the RV. When we woke up the next morning, there were clear skies as we look out over the bay.

We got another early start as this was the day. We were going to FINALLY make it to Jacksonville!!! By day 8 everyone was ready to be “home.” The drive from Pensacola to Jax is only around 5 hours without stops. You know how,when you really want to get somewhere it seems to take forever. That’s how day 8 felt. While the drive, including stops, only took about 7 hours, but it felt like 14. We were SO excited to see family.

Thankfully, the drive was uneventful and we were so happy to be with family once more. Keep following to learn about our adventures over the pas year in Jax. It’s been a fun ride!

What are your favorite spots in NOLA? What about Jax? We are always looking for fun places to visit and delicious spots to eat.